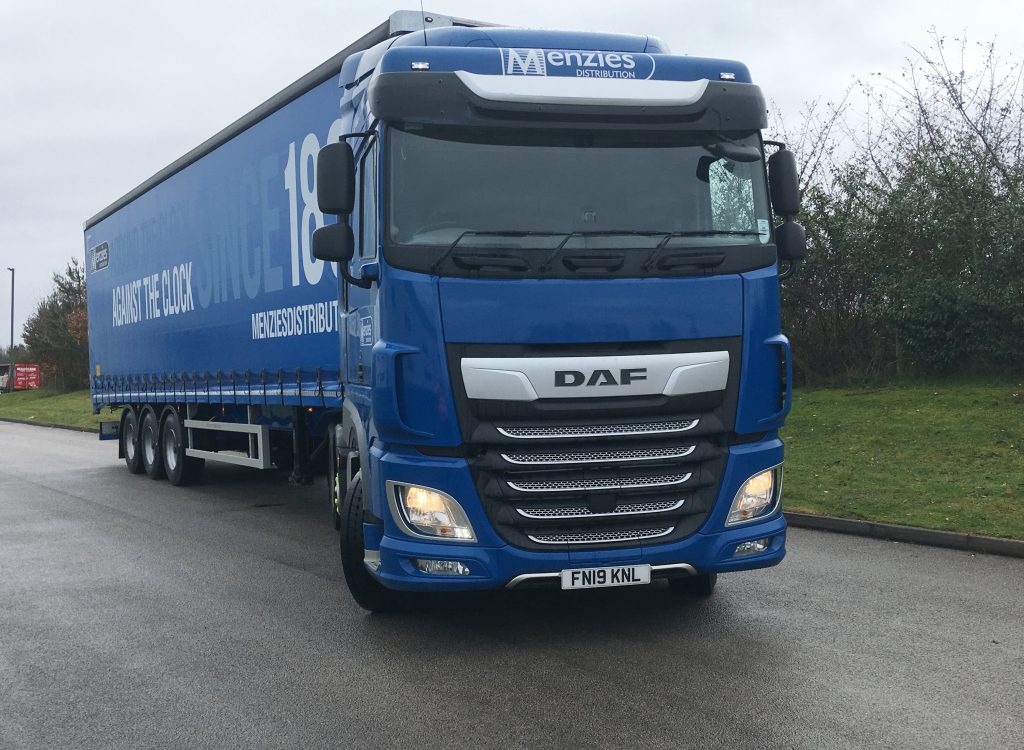 As part of a new five-year contract hire agreement with long-standing customer Menzies Distribution, Fraikin was tasked with supplying 75 commercial vehicle assets to the company within weeks. In order to meet this challenge, equivalent vehicles were sourced through its rental division, whilst the new assets were in build.

The rapid turnaround was required to ensure Menzies Distribution was ready for a major new contract delivering to retailers across the UK – and thanks to the resourceful team at Fraikin, it was able to achieve this.

Deliveries of the 27 new 44-tonne DAF XF tractors, alongside 42 single-deck and six double-deck Montracon curtainside trailers have now begun, extending Fraikin’s share of Menzies’ 600-strong fleet to around 70 per cent.

Lee Anderson, Transport and Assets Manager at Menzies Distribution, says: “We’ve enjoyed a strong relationship with Fraikin since 2005, and we see them very much as a trusted partner. This key contract began in December 2018, so we thought getting 75 assets to seven locations across the UK in time for the peak Christmas season was going to be a very tall order – we couldn’t have been more wrong, everything went like clockwork.

“It’s this level of commitment to their customers that sets Fraikin apart. They really stepped up when it mattered. Now, it’s fantastic to see the new vehicles ready to join the fleet.”

Fraikin will manage all repair, maintenance and servicing of the new assets through its national network of workshops and approved third-party repairers, ensuring all work is carried out near Menzies Distribution’s own depots.

Anderson adds: “Customer contracts such as this one are the lifeblood of our business, so guaranteeing uptime across the fleet is critical. Fraikin worked closely with us on the specification of every new addition, and their attention to every detail gives us real peace of mind.

“Plus, with Fraikin, we benefit from fixed costs and a dedicated point of contact we can speak to at any time, which is ideal for us.”

As part of the continuing relationship between the two companies, Fraikin is arranging for Menzies Distribution to trial a pair of IVECO Stralis NP tractors. The two vehicles will allow Menzies to evaluate the potential for fuelling its future fleet on either compressed natural gas (CNG) or liquefied natural gas (LNG).

Menzies Distribution specialises in retail delivery, transporting seven million newspapers and magazines to almost 30,000 retailers across the UK every day. The company also provides parcel and freight logistics throughout Scotland.

FRAIKIN UK PARTNERS WITH SAMSARA TO…

Fraikin UK, part of one of Europe’s largest commercial vehicle fleet services companies, has partnered with Samsara, pioneer of the Connected Operations Cloud, to surface real-time data that will help…

Commercial fleet services company, Fraikin, has underlined its commitment to innovation with the appointment of a Technology Champion – a new role designed to help customers maximise the benefits of…

Laminates manufacturer, Rearo, has taken delivery of its first commercial vehicles on contract hire, after Fraikin won a competitive tender to replace the company's fleet of owned trucks and vans.…

Since 1944, FRAIKIN have supported you in your daily activity.

Today, more than ever, protecting you and our respective employees is our priority. We are following the situation very closely and are strictly applying the authorities’ recommendations.

During this difficult time, we remain at your service and are here to help you maintain your company’s business. We will at all times respect and ensure the safety of our customers and the FRAIKIN teams, and we would ask you in return to respect the hygiene and barrier rules when visiting our sites.

FRAIKIN will continue to be by your side on a daily basis, and we remain of course at your service, and will respond to all events. Please use email communication in the first instance, so that we can respond to you as efficiently as possible.

Take care of yourself and your loved ones